My slides for my recent Association for Linguistic Typology Talk on “Standard Average Australian” are now available on Zenodo. The slides are self-explanatory, I think, and the Zenodo page has the long abstract that I submitted to the ALT for conference review. In brief, the talk is about the (largely unreferenced) claims that many Australianists (including me, I should add) have made about the languages of the country.

I am currently writing up the results for submission to Linguistic Typology. Thanks very much to the ALT conference participants, particularly the Australianists I talked to about this.

This week I’ve been giving three talks in the Department of Linguistics at UC Berkeley. It’s been a very stimulating week, with lots of good feedback, brainstorming for new directions, and problem troubleshooting. I’ve also met with many of the graduate students (including two who were my students as undergraduates and who worked on the data that led to some of the results presented in the talks) to hear about their work.

I’m posting slides for two of the talks here. On Monday, I gave an overview of the Pama-Nyungan project and talked about how the tree was created, what it implies to take an ‘evolutionary’ view of language (in this framework), and some off-shoots of the project (MondayPhylogenetics powerpoint). On Wednesday, I talked about one further extension, using the tree to investigate the evolution of colo(u)r terminology. (WednesdayColor powerpoint.)

The other talk, on Tuesday, was on using my Bardi corpus to study life-span changes and variation. At the end of the talk when I was chatting, one of the sociolinguists expressed surprise that I hadn’t anonymized the identities of the Bardi speakers. I hadn’t thought about it. As a fieldworker working on Bardi, I did talk about this general point with the people I worked with, and all were keen to be acknowledged for their work on the language, and recognized among the key custodians of their culture. However, with the work on aging and variation, I am no longer talking directly about Bardi as a language, and more about the properties of the speech of individual speakers, and the more I thought about it, the less comfortable I am with putting that up online without talking to Bardi people about it first. It’s not just a matter of anonymizing the slides, because there are so few speakers, anyone who has any of my other Bardi work will be able to easily work out who I’m talking about. There will be a paper (soon I hope) on using forced alignment in field research, so some of the results will be in that paper, probably now along with a discussion of the ethics of same.

I was recently quoted in a National Geographic article talking about research on absolute frames of reference. I mentioned some data from Bardi but the only description is brief, and it’s in my 2012 [unfortunately incredibly expensive] reference grammar. Here’s a summary of how to talk about directions in Bardi.

Bardi people use several different ways to talk about directions and relative location. This in itself is not unusual. Here are the systems I have data for:

Bardi does have words for ‘left’ and ‘right’: they are aarlgoodoo and joorroonggoo respectively. They aren’t much used, however. In story-telling (my main source of direction terms), the only common use is when talking about the direction of boomerang throwing, where it refers to the direction of curvature of the boomerang’s path. Joorroonggoo also means ‘straight’, and that is its more common meaning.

Joorroongg-ondarr morr arrjamb ngandankal.
The road was straight, so I walked on it. (ie, it was a straight path [to where I was headed], so I went down it.)

Bardi has a system of directions roughly equivalent to English compass points and based on the direction of prevailing winds. Ardi is ‘north’ (or, more properly, a bit east of north), baarnarr is ‘east’ alang is ‘south’, and goolarr is west.

These compass points are mostly used for general directions, not for directions to specific places (for that, a sequence of place names is used, as I’ll describe below). They aren’t used for smaller frames of reference (so, you wouldn’t say something like ‘the dog is on the north side of the house’, like some languages without relative frames of reference have). The following example is typical.

Aalga ardi wirr iyarrmin.
The sun rises in the northeast.

For examples like describing the relative placement of a dog and a house, Bardi speakers typically use deictic markers like ‘here’, ‘there’, or ‘this side’ and ‘the other side’.

Ginyinggon roowil innyana barda nyoonoo, nyanbooroonony daab innyana biinyba.
Then he started walking to the other side of the marsh. (literally, then he walked there, on the other side he climbed up [through] the marsh).

Bardi has two adverbs, joordarrarr ‘with the tide’ and arrinar ‘against the tide’.

They are also used in giving directions. Given that Bardi country is in an area with very swift currents and a 10 metre inter-tidal range at king tides, it is not surprising that Bardi people know a great deal about water navigation, tidal movements, and how to sail in tricky waters. A lot of Bardi food traditionally also depended on the tides (such as good times for reefing, fishing and hunting).

Finally, a very common way of giving directions involves providing a chain of place names between the speaker’s current location and the goal. Bardi country is incredibly rich in named places; the dictionary has well over 500 names recorded, including 100 names on Sunday Island (Iwany) alone; Iwany is just over a mile across and nearly 2 miles from north to south, so it’s not exactly huge. This way of giving directions is, of course, not easy to follow if you don’t know the places. In traditional Bardi society, however, everyone would have known them, and so talking about directions in that way is a way of reinforcing the names and their sequence.

I have a list of sources that will be released in Phase I of the Australian Lexical Database.

This represents about 170,000 lexical items and about 80 sources other than the Curr (1886) wordlists, which comprise the bulk of the collection.

We have been conservative in what is released because not everyone we have contacted about data has replied, and because we are still in the process of finding contact information for all the relevant stakeholders.

Of the people we contacted, only 5 sources were ‘closed’ (that is, unable to be distributed). The vast majority of researchers and communities gave permission for their languages to be represented in the database, which was really gratifying. 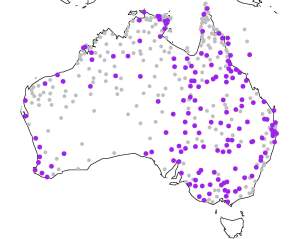 Phase I sources mapped against languages in comparative lexical database

I have released two learner’s guides on leanpub.com. One is for Yan-nhaŋu, the other for Bardi. They were written several years ago (first version for Yan-nhaŋu was 2006, and 2010 for Bardi) but I have been unable to find a more ‘traditional’ publisher for them. They have both been circulated in the relevant communities in both electronic and paper form. Perhaps ironically, this circulation was one of the reasons that I haven’t been able to find a publisher; the publishers I contacted assumed that I had already saturated the market for the books and that there would be no demand.

The uploaded versions of these Guides are based on the most recent updates; 2010 for Yan-nhaŋu, when I used the guide in a class on Aboriginal languages at Yale, and 2011 for Bardi, when I was last in the field. My negotiations with community members about these guides included permission to publish. Here are the direct links:

Please note the pricing structure: you don’t have to pay for them to download them, but you can. You name your own price. I have suggested $14.99 for each book. The proceeds from these books will go to support the Endangered Language Fund. The ELF supported two trips to work on Bardi (in 2003 and 2011). The royalties are 90% minus 50c, so of a $14.99 book price, $12.99 goes to the ELF.

The Bardi learner’s guide was originally a class project, at Rice in 2006. It was subsequently heavily edited (several times) and expanded, most recently by my former student Laura Kling, who did her senior thesis on Bardi. The Yan-nhaŋu guide was originally written after 5 weeks fieldwork at Milingimbi, but was expanded after subsequent trips. I have a big debt to Prof. Jane Simpson in these guides. Both guides used the Warumungu Learner’s Guide as a template (the Yan-nhaŋu guide more closely than the Bardi one) and it made it much easier to write a fairly detailed guide in the short space of time available.

The books use leanpub as the host site. I have been quite impressed with how easy it was to use them. They mostly have technical computing books but it would be nice to see more language-related materials up there. Their pricing structure seems a bit more friendly than Amazon’s (though they don’t have print on demand). hulu.com is another self-publishing site that has been recommended to me.

One of the advantages of a large lexical database is the ability to test large-scale ideas about language behaviors. As a quick experiment this afternoon, I extracted all the colexification patterns from the database. These are all the words that are glossed by multiple distinct words within the same language.* 20 minutes to download the file, and about the same to manipulate it with the igraph package in R to produce some cluster visualisations.

*Of course, there are going to be issues with this, particularly in the lack of colexification evidence for some languages. The data are only as complete or as good as the dictionaries that went into the database in the first place.

Anggarrgoon posts (of which there may be slightly more than one per year in future) will be cross-posted on my research web site, pamanyungan.net.